By Kristin and Michael

As we move into the fall, Elsa’s project list is getting a good workout. We hadn’t intended on being dock-bound at this point, but here we are. To make plans is to incur divine laughter.

After the transmission croaked, it took some engine-room gymnastics to remove it from the engine, and it is now in pieces on the workbench at home. Results are inconclusive. Many of the components in the transmission as removed do not match the Volvo manuals we have found, an oddball lock ring will not reveal its secrets and a seal is stubbornly still in situ, refusing to budge. To quote the transmission guy at Everett Marine, “Yeah, we’ve broken a few of those.” The subject of repowering has come up, but a replacement transmission is ordered and we will re-build the old grist mill in parallel. When it comes to old Volvo gearboxes, all roads lead to Joe DeMers at Sounds Marine in Hartford, CT. 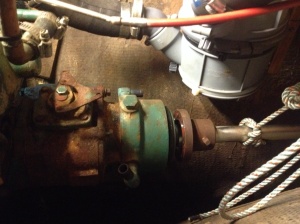 Seems ridiculous to replace a functioning engine to the tune of $13k, when it’s actually the $3000 tranny that’s kaput. The gearbox is the weak link in the drivetrain. It’s a shame that the transmission bits aren’t as robust as the engine itself. The down-side risk is that we’re kicking the re-powering can down the road. A new Beta 38 is soooo quiet and the phrase “obsolete part” is nowhere to be found in the service manual.

So Elsa is without a working power plant right now, which is a bummer since the weather has been gorgeous here in the Seattle area, and several good sailing weekend have passed us by. To tide himself over, Michael has taken on a few other items on the To Do list.

This week, the new Harken Mark IV roller furling was installed! The new 3/8” headstay had gone on a couple weeks ago, and now the change-over is complete. The new 110% genie is ready from Doyle Sails, with the last bits now able to finished up with all the new hardware in place. The sail features 8.5 oz offshore fabric, three foam reefing strips, and grey Sunbrella fabric for UV protection. A 110 headsail and a 48’ luff will provide plenty of sail running light-handed on jib and mizzen.

So between the low of the transmission woes and the high of the new roller furler, Michael tries to keep busy. He was inspired to add ratlines, and found a source of plantation mahogany for the task. Perfecting the attachment technique a la Brion Toss on 5/16” shrouds is still a work in process, but a handful are installed and work great. Rigger’s tape and lashing alone may not be strong enough, so the long-term alternative is serving the lower shrouds. 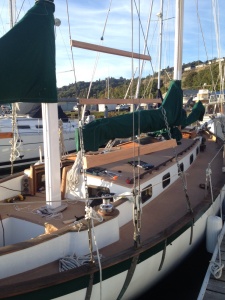 His other crafty project was adding pin rails. The mizzen rails are in place, and we are searching for just the right pins. Pin rails freshly drilled. 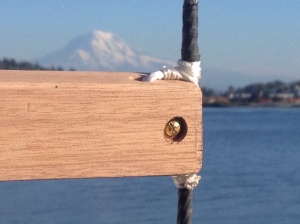 Pins borrowed from neighbor boat, just to get the full effect.

The old adage ‘cruising is the process of working on your boat in exotic places’ isn’t really playing out for us right now. Tacoma isn’t very exotic. But we will be grateful for the chance to take care of these tasks safe at our dock, given some of the alternatives that we could’ve been handed.